The sky’s the limit: If we look at just the single-digit Fibonacci numbers, how many dates this year had some set of consecutive Fibonacci numbers in the right order? (Just look at month and day, and in that order.)

Little kids: The jump from 5 to 8. The jumps keep getting bigger. Bonus: 11, because you’re adding 2.

Big kids: 55. Bonus: Doubling a Fibonacci number will always give you a bigger number than the next Fibonacci number. Since each number is added to the one before it to make the next one, and since the one before it is always smaller, your new number can’t be fully double the most recent number. 5 has to get added to 3 to make 8, so that’s less than 2×5 (10). And 8 has to get added to 5 to make 13, which is less than 16. As the numbers get really big, each number is about 1.6 times the previous number. 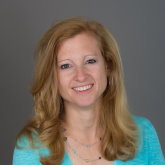 Laura Bilodeau Overdeck is founder and president of Bedtime Math Foundation. Her goal is to make math as playful for kids as it was for her when she was a child. Her mom had Laura baking before she could walk, and her dad had her using power tools at a very unsafe age, measuring lengths, widths and angles in the process. Armed with this early love of numbers, Laura went on to get a BA in astrophysics from Princeton University, and an MBA from the Wharton School of Business; she continues to star-gaze today. Laura’s other interests include her three lively children, chocolate, extreme vehicles, and Lego Mindstorms.